Amongst those paintings from the Lanckoroński Collection which after the Second World War were sold on the European art market, are three, kindly lent by their present owners for the first of the two exhibitions. They are: Saint George and the Dragon by Paolo Uccello (owned presently by the National Gallery in London), acquired originally by Count Karol Lanckoroński prior to 1892; Portrait of a 21 year-old Woman by a follower of Bartholomaeus Bruyn the Elder (today the property of the Ackland Art Museum in Chapel Hill), purchased by the count in 1885 at an auction of the possessions of his close acquaintance, the artist Hans Makart, who died in 1884; and A Group in a Park by Barend Graat, earlier in the collection of the last King of Poland, Stanislas August (now belonging to the Rijksmuseum in Amsterdam). All three were amongst the most outstanding works which once belonged to the Viennese collection of the Lanckoroński family.

Guests were also invited to visit the Wawel’s third exhibition, entitled ‘Wyczółkowski Found’, presenting the painting A Highland Girl, sometimes also called A Country Lass in a Yellow Shawl, which was stolen during the Second World War having been earlier donated to the Royal Castle as part of the Wawel Foundation of Count Leon Piniński, founded in 1931. 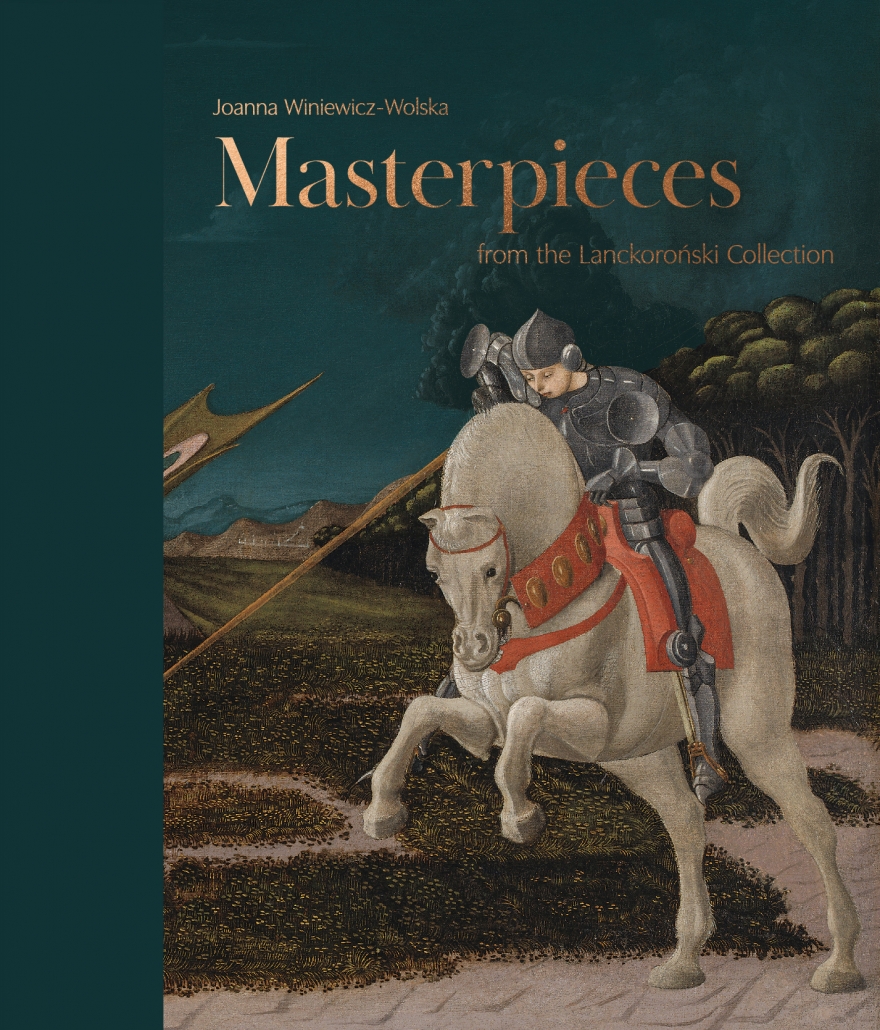 A book financed by the Lanckoronski Foundation on the history of the Lanckoroński Collection, with emphasis on the paintings in the exhibition. 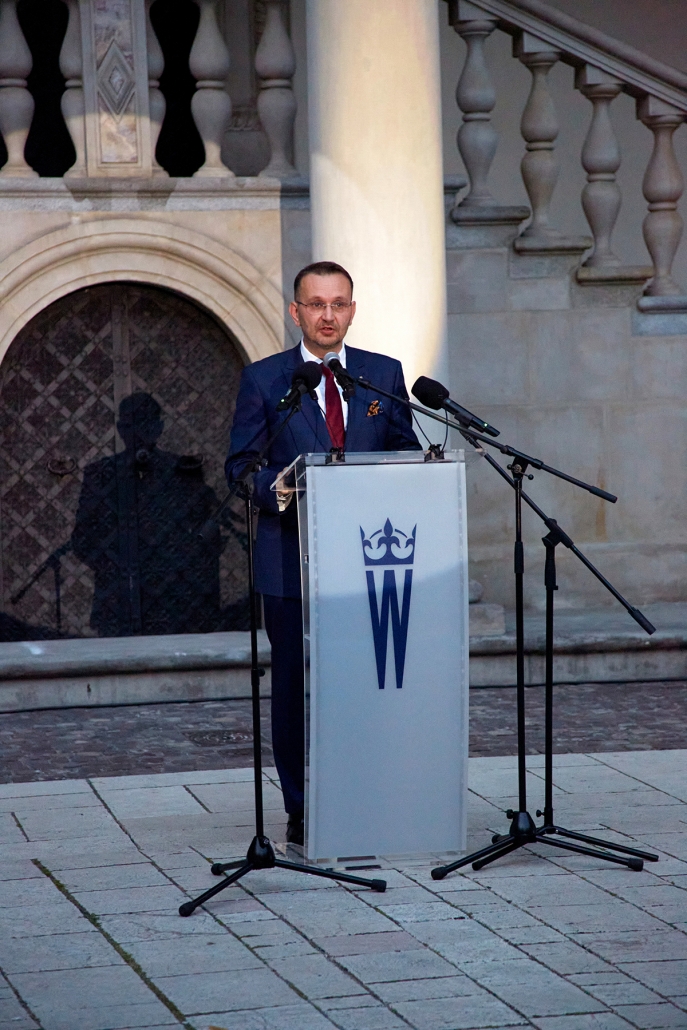 The director of the Wawel Royal Castle, Professor Andrzej Betlej. 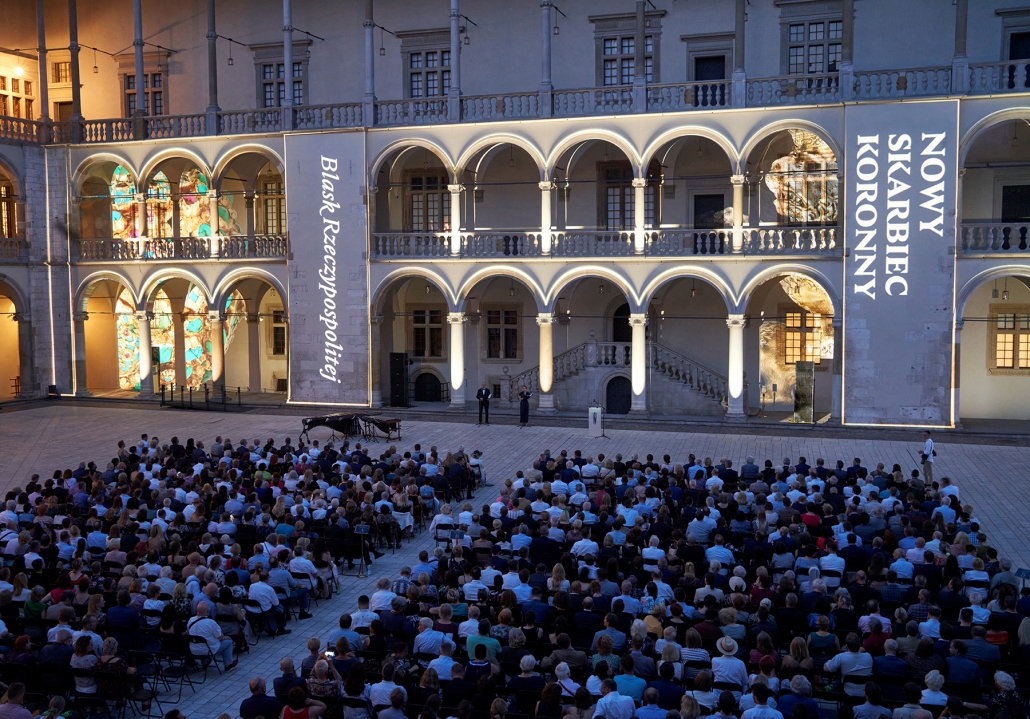 The opening of the exhibitions. 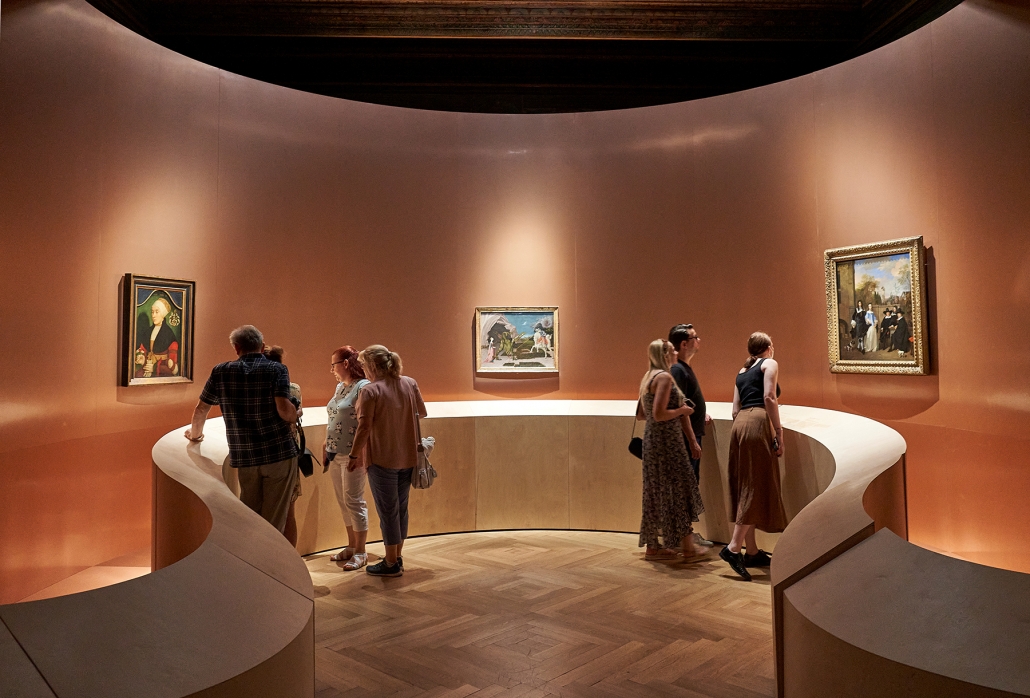 The three paintings formerly belonging to the Lanckoroński Collection:
Saint George and the Dragon by Paolo Uccello (centre),
Portrait of a 21 year-old Woman
by a follower of Bartholomaeus Bruyn the Elder (left),
and A Group in a Park by Barend Graat (right). 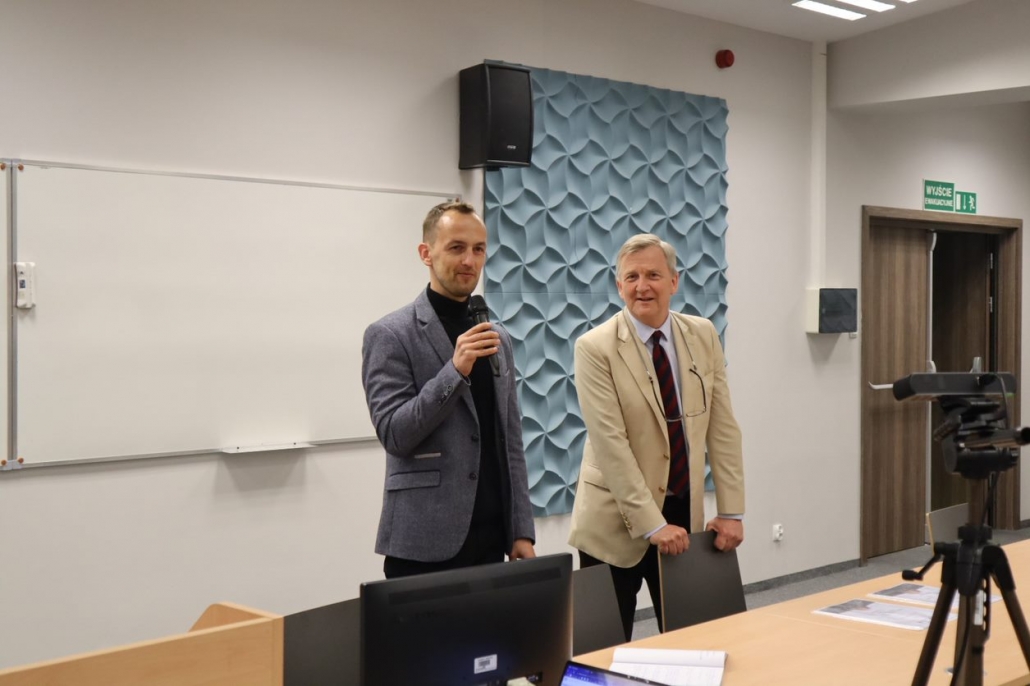 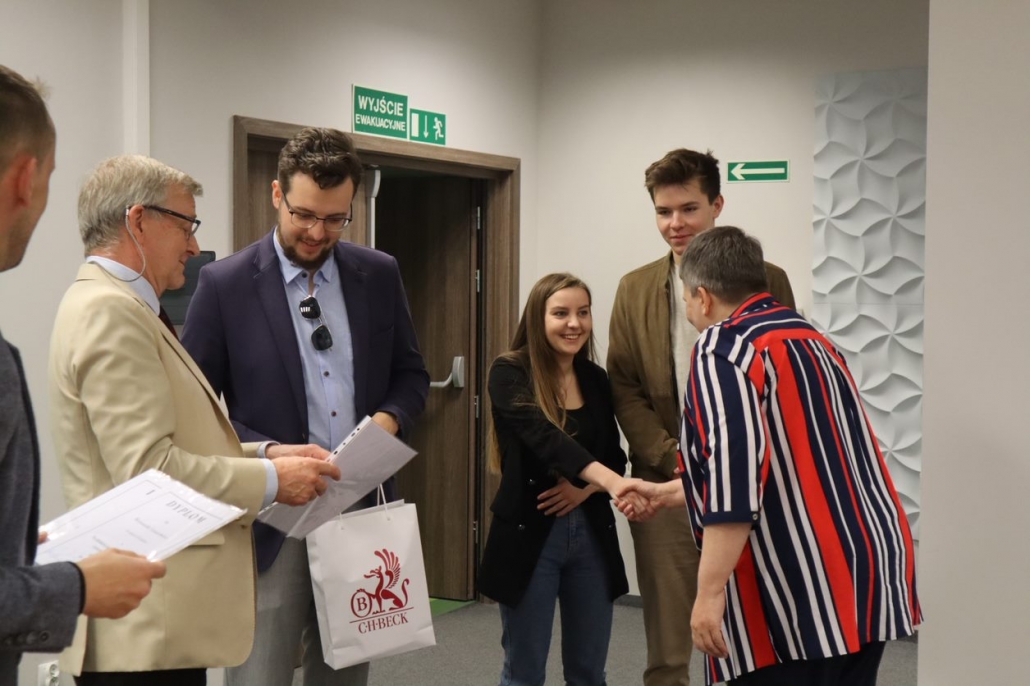 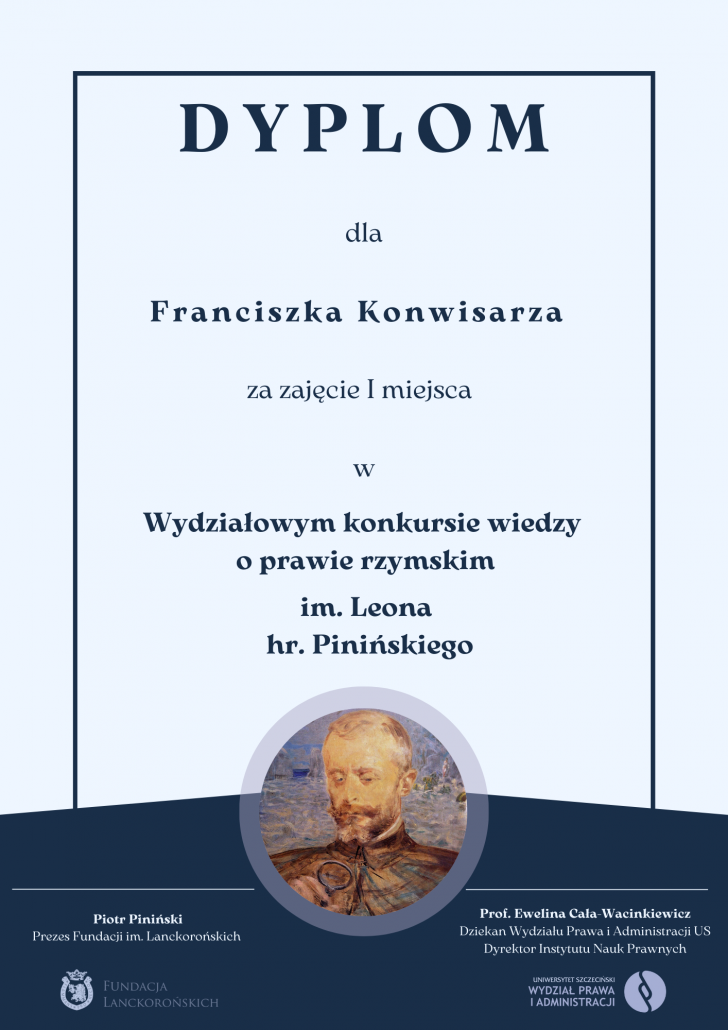 The diploma for 1st prize. 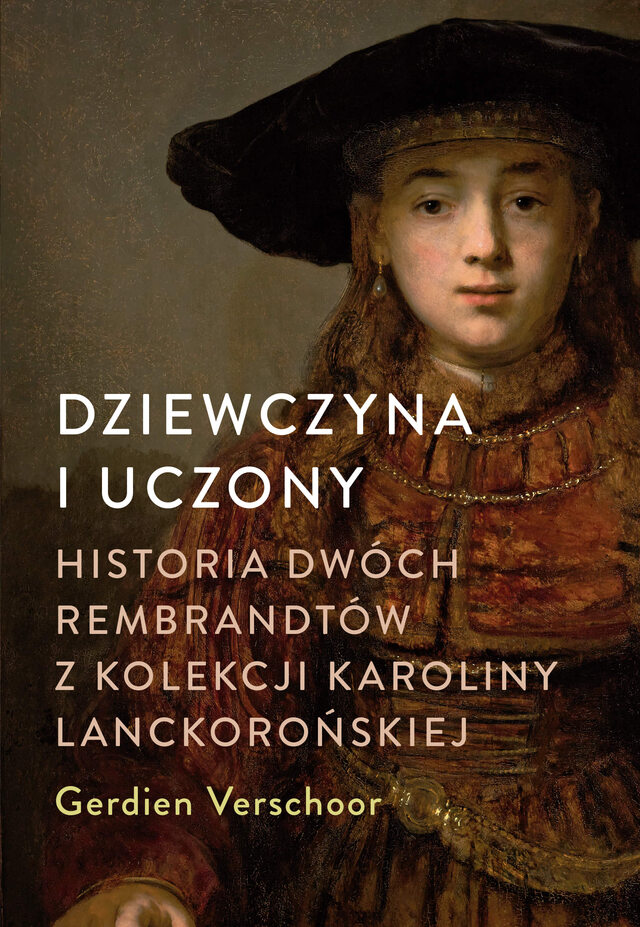 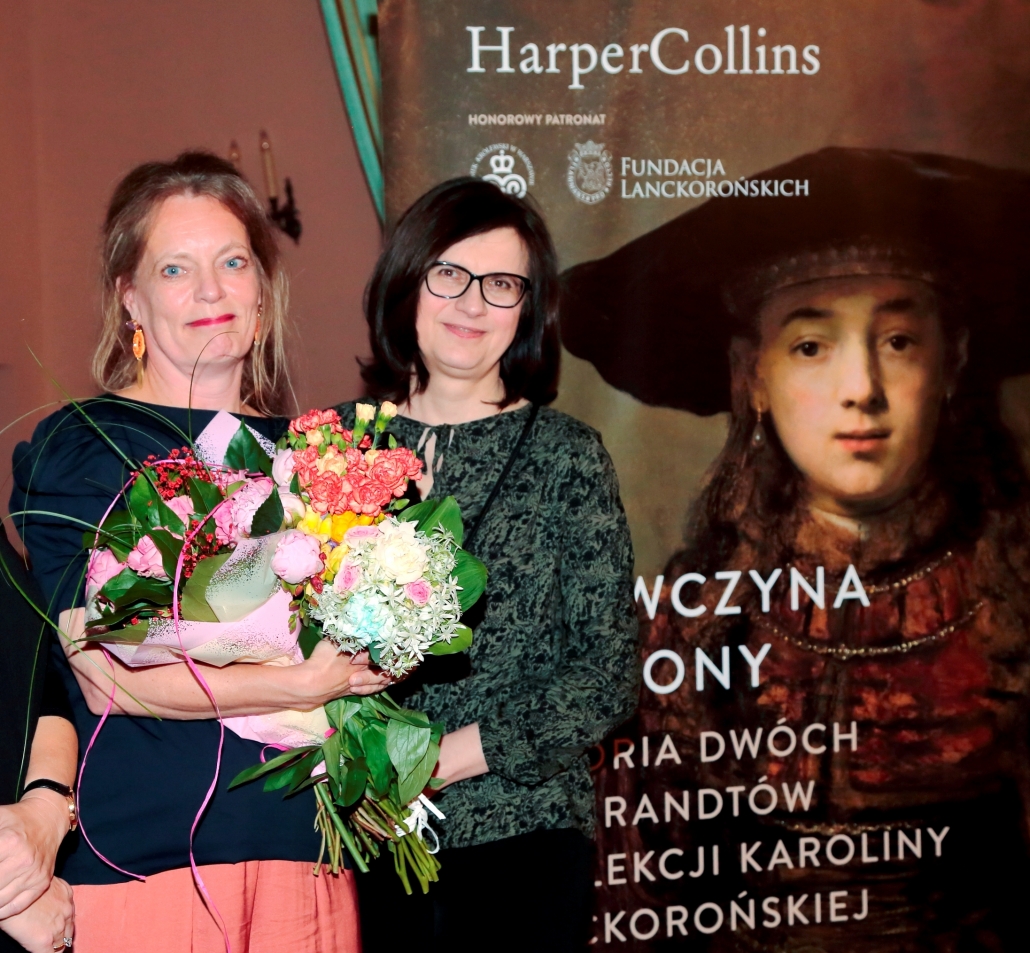 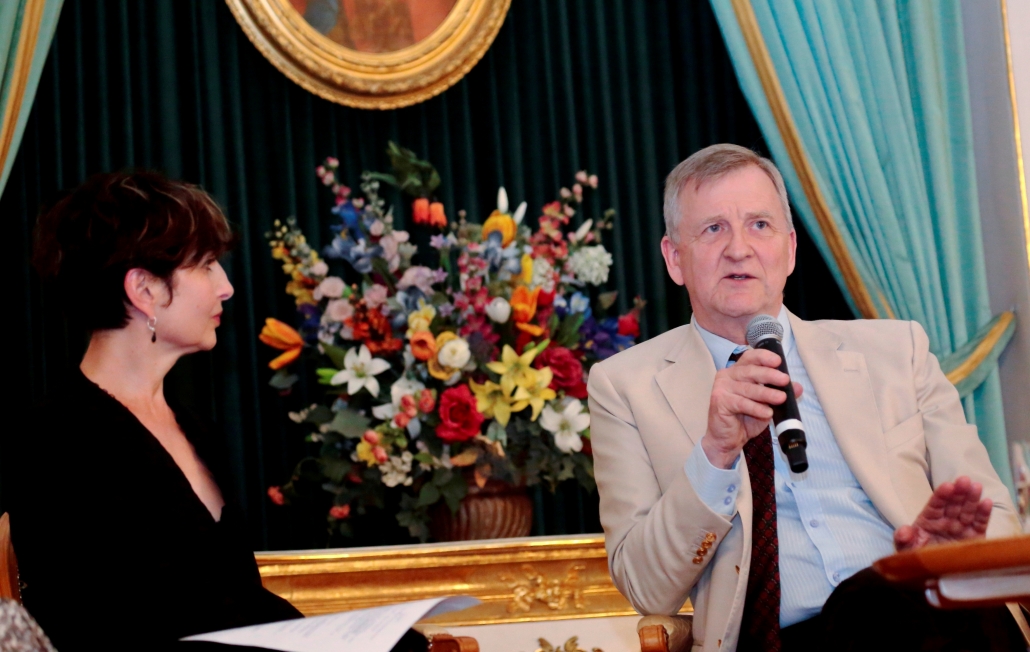 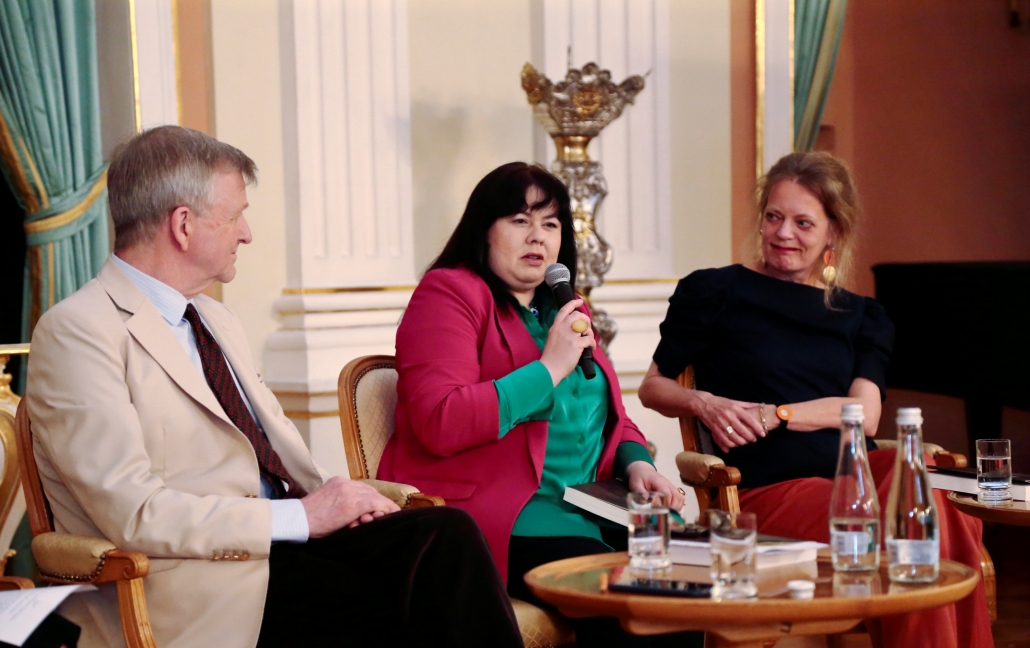 (from left to right) The President of the Lanckoronski Foundation Piotr Piniński,
Alicja Jakubowska of the Department of Art of the Royal Castle in Warsaw,
and the book’s author Gerdien Verschoor.

The centre of the Polish Academy of Science in Vienna, which for years has hosted recipients of scholarships from the Lanckoronski Foundation, this year initiated a project entitled ‘Young Researchers Take the Lead’. This is being done in co-operation with the Foundation as well as the Polish Academy of Learning in Kraków. Its aim is to show scholarship holders to a wide audience, and highlight the importance of establishing contacts with Austrian academic institutions as an important milestone on the road to realizing their scholarly ambitions. ‘Young Researchers Take the Lead’ is a cycle of filmed interviews with scholarship holders, who briefly, though with passion, humour and perspicacity, describe their current research projects, plans associated with their time spent in Vienna, and greatest ambitions in their chosen field. 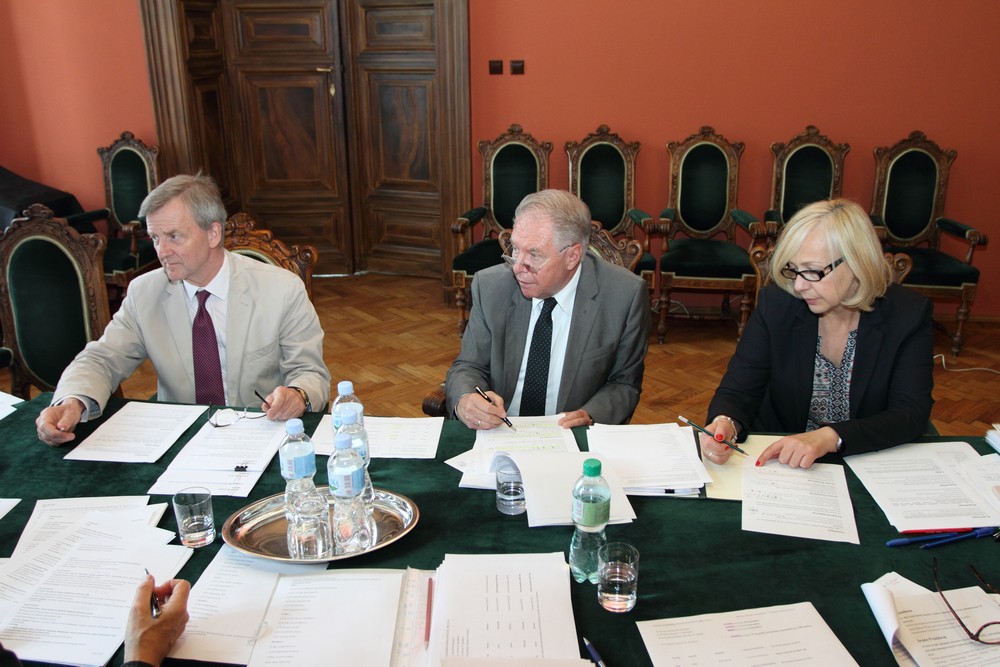 (from left to right) Piotr Piniński president of the Lanckoronski Foundation, professor Andrzej Borowski the vice-president of the Polish Academy of Learning, and Katarzyna Dzięgło who is the committee’s secretary. 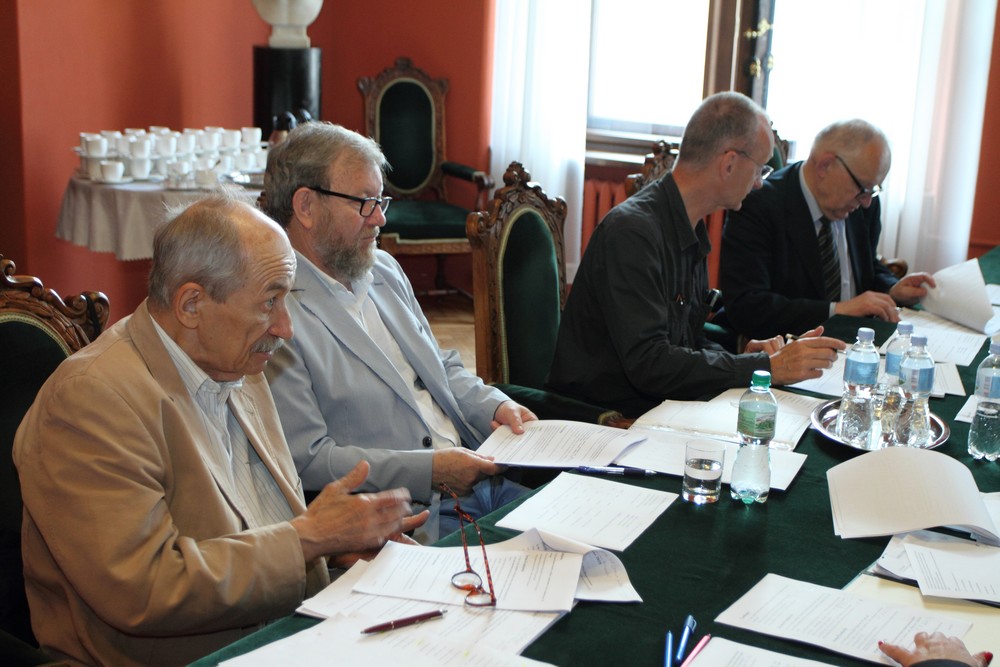 http://fundacjalanckoronskich.org/wp-content/uploads/2015/10/logoNowePL-01.png 0 0 fundacja http://fundacjalanckoronskich.org/wp-content/uploads/2015/10/logoNowePL-01.png fundacja2021-02-10 06:52:082021-07-01 12:21:09The annual meeting of the Lanckoroński Foundation’s Scholarship Committee, held at the Polish Academy of Learning in Kraków which administers the programme

† With deep sadness the Foundation regrets the loss of its long-standing member, Stanisław August Morawski, who died in Rome on December 23rd at the age of ninety seven. The funeral took place there on December 27th. His contribution to Polish culture, in particular that of the émigré Polish community in Italy, was of great significance. 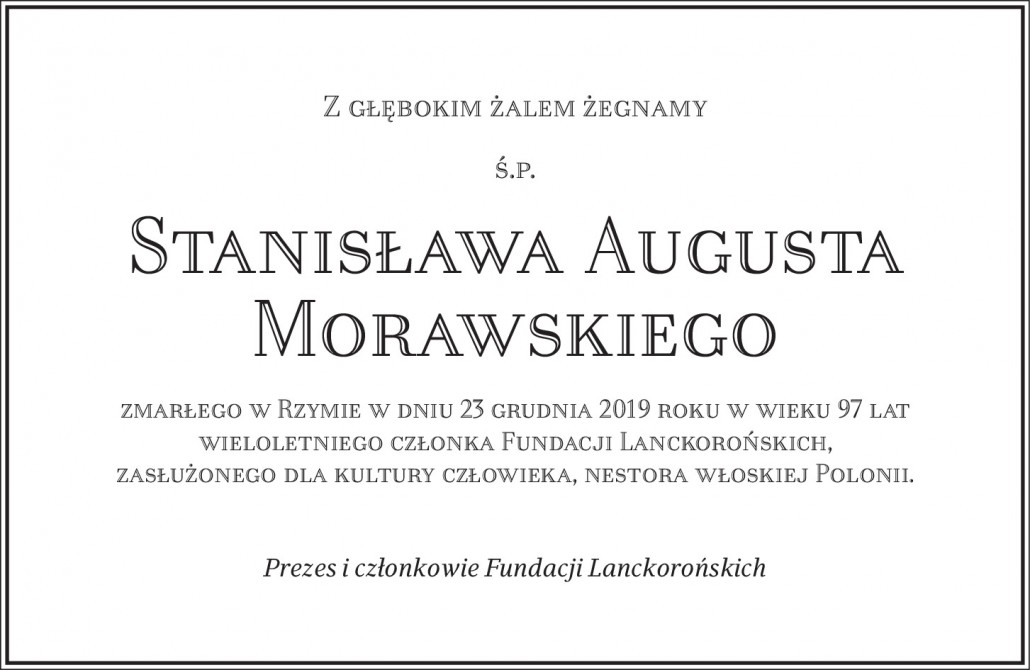 Dr Olga Linkiewicz of the Institute of History of the Polish Academy of Sciences received the Kazimierz Moczarski City of Warsaw History Award for her book “Locality and Nationalism. Rural communities in Eastern Galicia in the interwar period”, published with the support of the Lanckoronski Foundation (see: News – New Publications 2018).

The Kazimierz Moczarski City of Warsaw History Award, established in December 2018 by the Warsaw City Council, is a continuation of the award created in 2009 for the best book on the history of Poland. The project is coordinated by the History Meeting House – the Cultural Institution of the City of Warsaw, as well as by the Kazimierz and Zofia Moczarski Foundation. The award promotes the most important publications and best authors. It is a tribute to the memory of Kazimierz Moczarski, a journalist, lawyer and Home Army soldier who was imprisoned after the war on charges of anti-communist activity. Moczarski wrote the well-known “Rozmowy z katem” (“Conversations with an executioner”), which was translated into many languages.

We feel obliged to inform public opinion about the situation and circumstances and to declare emphatically that appropriate legal steps will be taken in the event of further examples of similar behaviour on the part of Władysław Teofil Bartoszewski.

The most relevant sources: 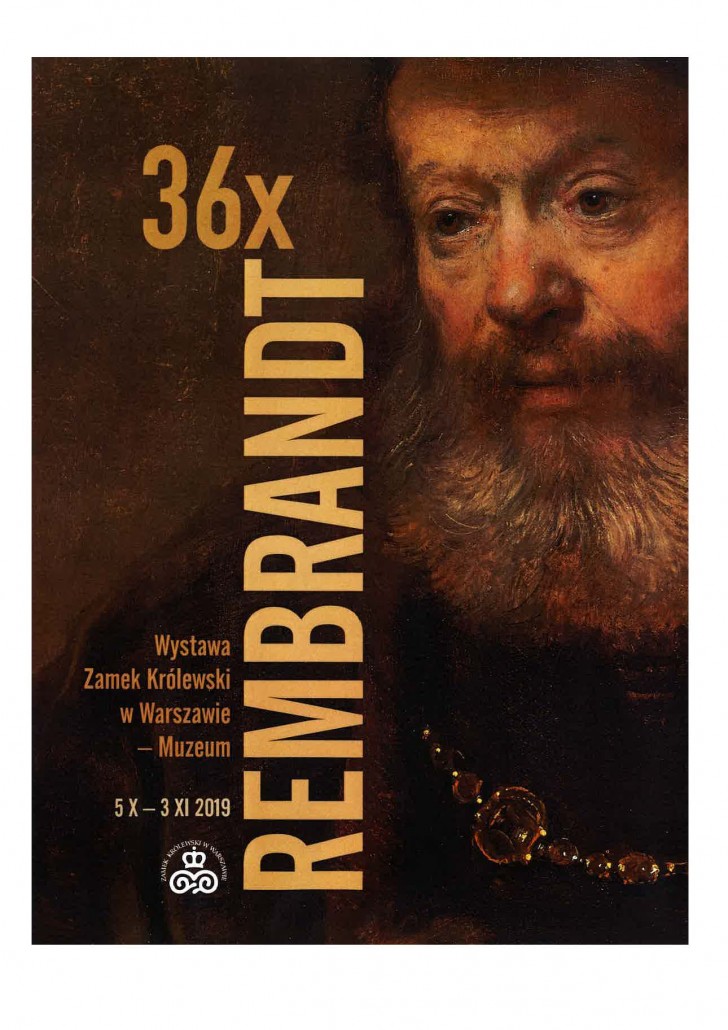 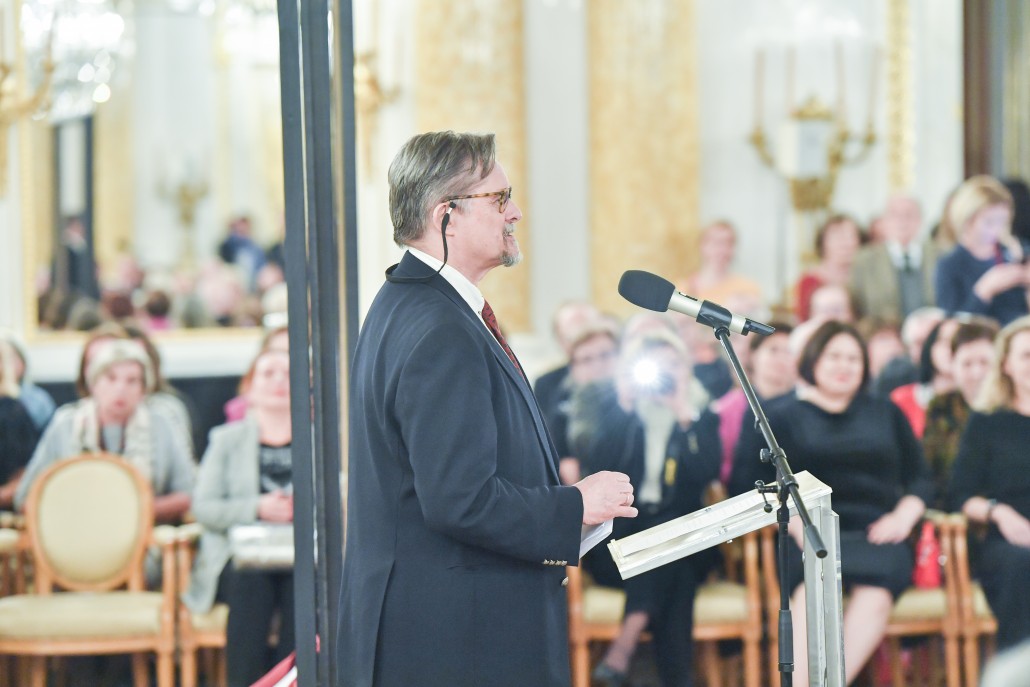 Jakub Borawski, a member of the Council of the Lanckoronski Foundation, speaking during the opening of the exhibition entitled “36 x Rembrandt”. 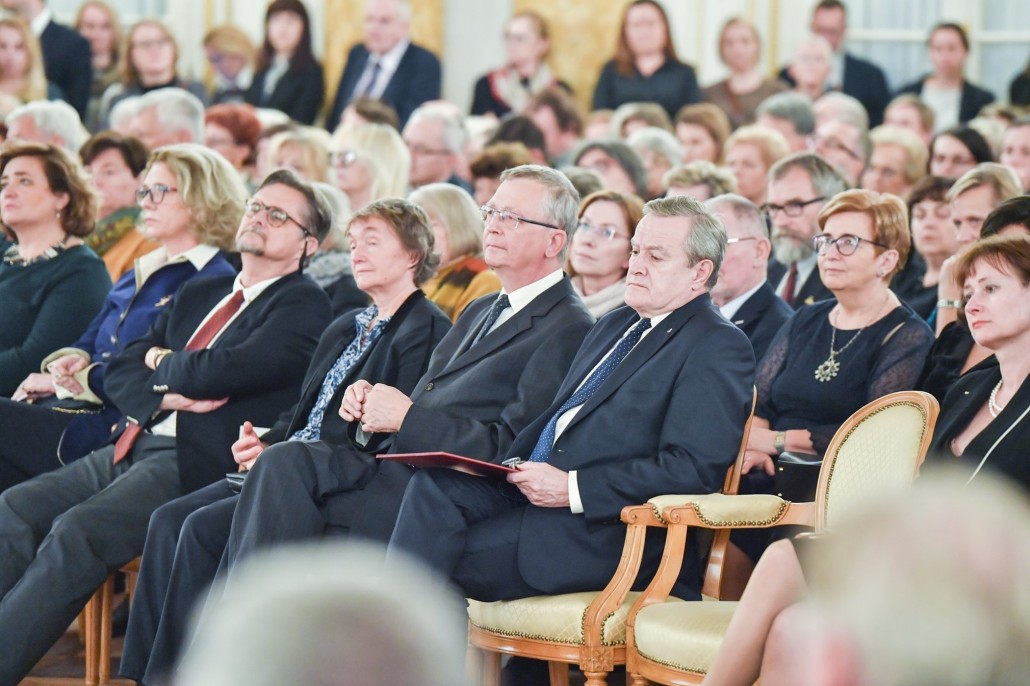 Jakub Borawski, as the representative of the Lanckoronski Foundation, during the opening of the exhibition “36 x Rembrandt”. To his right are the Minister of Culture Professor Piotr Gliński as well as the Director of the Royal Castle in Warsaw Professor Wojciech Fałkowski.

http://fundacjalanckoronskich.org/wp-content/uploads/2015/10/logoNowePL-01.png 0 0 fundacja http://fundacjalanckoronskich.org/wp-content/uploads/2015/10/logoNowePL-01.png fundacja2019-10-21 14:48:242019-10-21 14:48:24The opening of the exhibition at the Royal Castle in Warsaw, entitled “36 x Rembrandt”, took place on 4 October 2019, the centrepieces of which are the paintings “Girl in a Window frame” and “Scholar at a Lectern”. Both works of art were donated to the Royal Castle in 1994 as part of Professor Karolina Lanckorońska’s gift to the Polish Nation and are usually on display in the Castle’s Lanckoroński Gallery. The exhibition also provides the occasion to celebrate the twenty-fifth anniversary of that exceptional donation. Also on show are drawings and prints lent by the Print Section of the University of Warsaw’s Library as well as the Polish Academy of Learning in Kraków. 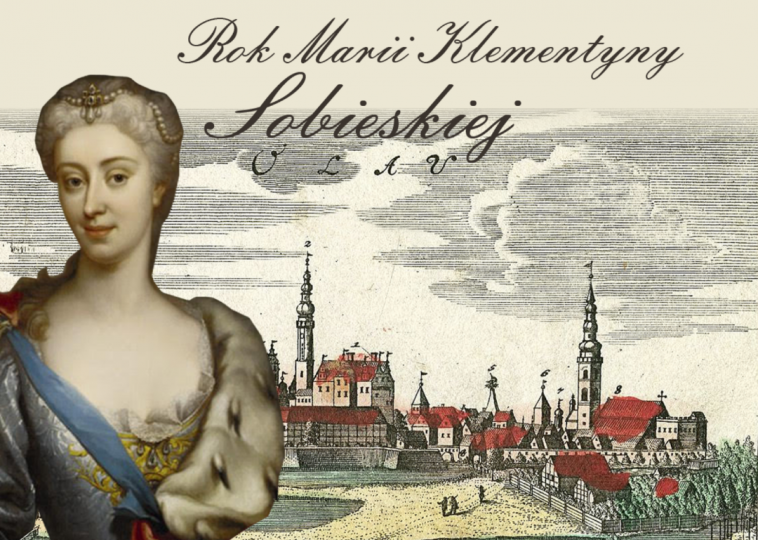 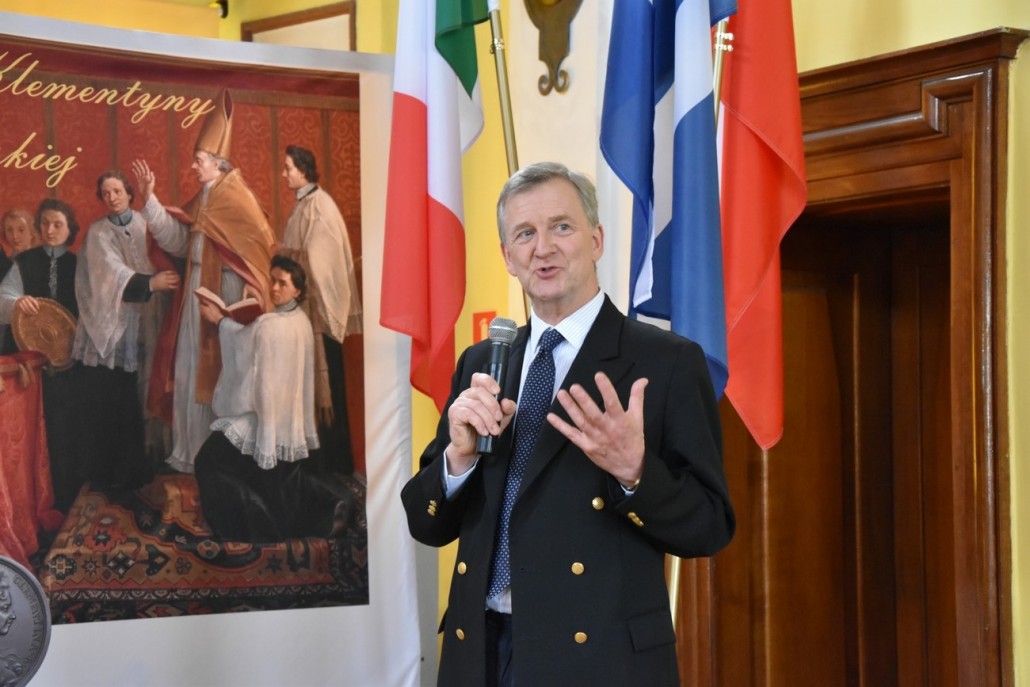 The president of the Lanckoronski Foundation Piotr Piniński during the event to celebrate the anniversary of the marriage of Maria Clementine Sobieska to the exiled King James III of Great Britain. 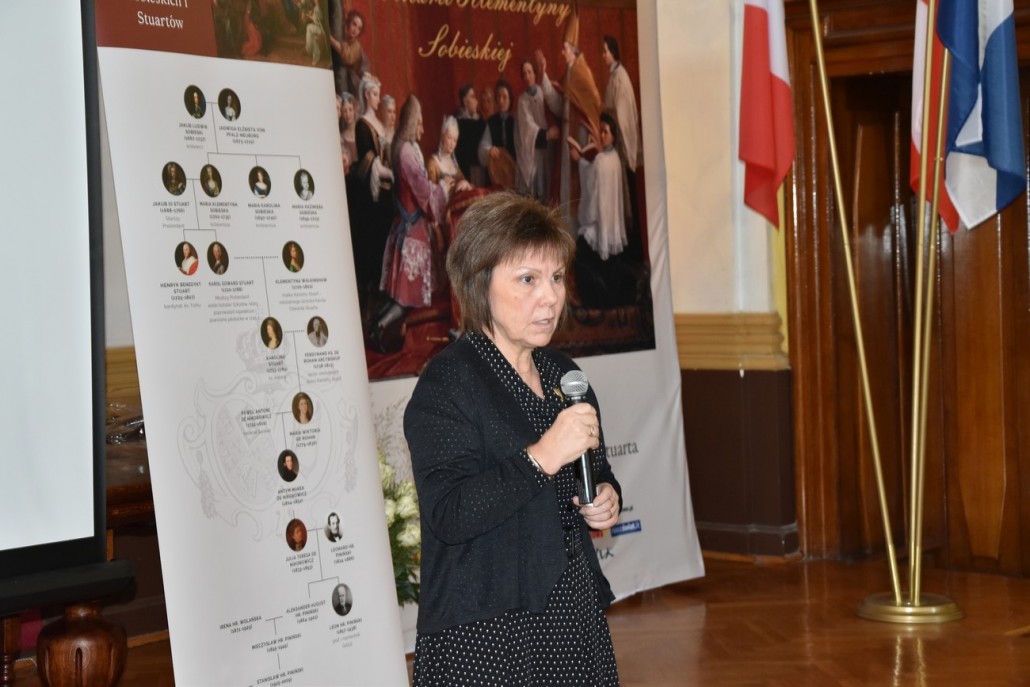 Professor Aleksandra Skrzypietz of the University of Silesia in Katowice during her lecture on Maria Clementine Sobieska. 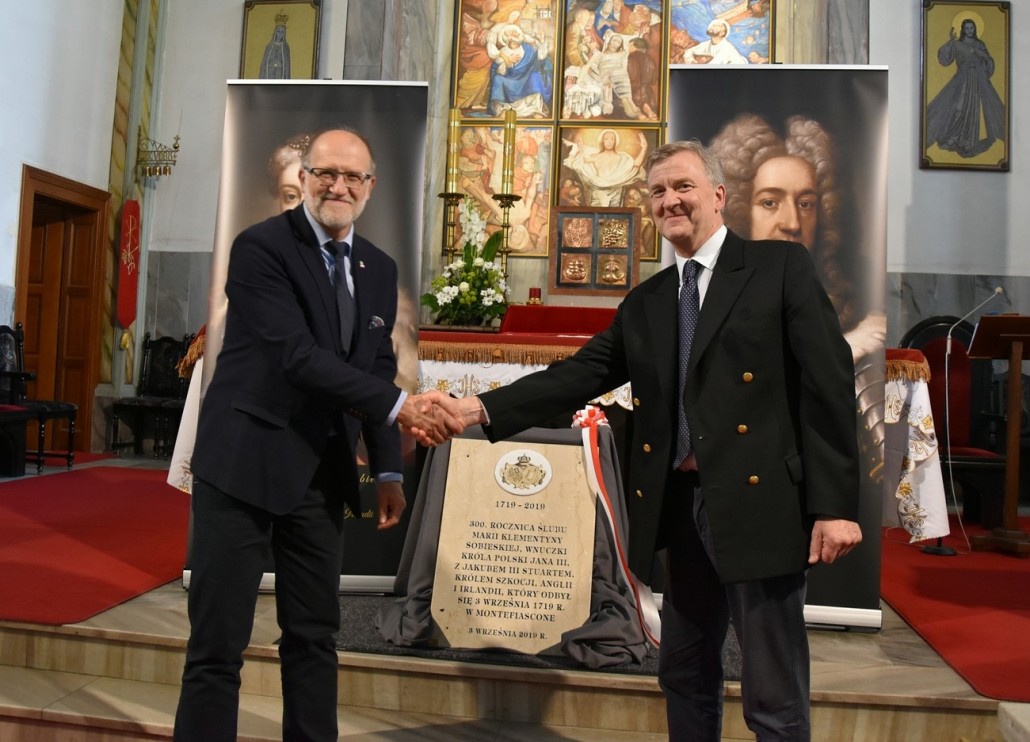 The Starosta of Oława Zdzisław Brezdeń and Piotr Piniński unveil the memorial in the Church of Saints Peter and Paul in Oława which commemorates the three hundredth anniversary of the marriage of Maria Clementine Sobieska and the exiled King James III of Great Britain.

http://fundacjalanckoronskich.org/wp-content/uploads/2015/10/logoNowePL-01.png 0 0 fundacja http://fundacjalanckoronskich.org/wp-content/uploads/2015/10/logoNowePL-01.png fundacja2019-10-21 12:39:472019-10-21 14:43:34The Lanckoronski Foundation was the honorary patron of the celebrations entitled “The Year of Maria Clementina Sobieska in Oława”, which on September 26-27 commemorated the three hundredth anniversary of the wedding of the granddaughter of King Jan III who was brought up at the Castle of Oława (formerly Ohlau), to King James III, the exiled Stuart King of Great Britain. The festivities, in which Piotr Piniński as president of the Lanckoronski Foundation took part, were organized by the Starosta of Oława Zdzisław Brezdeń and lasted two days, comprising, amongst other events, the celebration of Holy Mass, various speeches and lectures as well as the unveiling of a memorial plaque.
Scroll to top